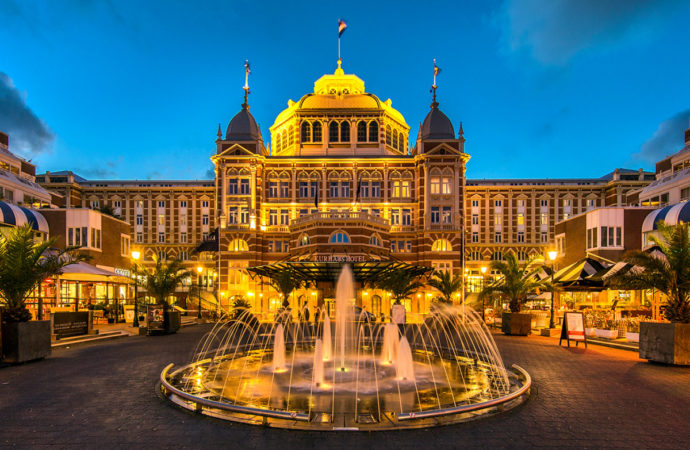 If you visit The Hague and especially the coast side of the city, Scheveningen, you can’t miss it. Amrâth Grand Hotel Kurhaus. An aesthetic and magnificent building right at the beach. If you don’t know the city ‘The Hague’, it is right at the North Sea in The Netherlands, read more about it here.

A brief history of the Kurhaus

In 1818 Jacob Pronk build a small wooden bathhouse with just 4 modest rooms fitted with their own private bath tub. It was a great success and only 2 years later it was rebuild in stone. Later in 1828 the business was taken over by the city The Hague. The Grand Hotel des Baines was built on almost the same spot. Inspired by the Kurhaus of Aken, it had 22 rooms. Its status quickly rose and it was starting to be a luxury spa resort for people of high status, mainly from Germany.

In 1880 the city of The Hague transferred their share to the ‘Maatschappij Zeebad Scheveningen’. This private company decided to demolish the building and replace it with a new one. The Kurhaus Hotel with 120 rooms, 2 restaurants, various halls and the main foyer the Kurzaal. Only 18 months later the building burned down and was rebuild thanks to extremely hard work within a year to be operational before the season of 1887.

After that manager Bernhard Goldbeck decided to create a guest book named the Golden Book. Since then it has been signed by many Royals and artists. Even the queen of The Netherlands signed this famous book. In 2014 the former owner of hotel Kurhaus went bankrupt and the hotel was sold to The Amrâth Group.

Although the Hotel has a very classy and formal style from the outside it does not want to create a formal environment. For decades it has been the luxury escape for the upper class but in the last couple of years this has been changed. They kept the style and looks for the most part but drastically changed their approach to the customer. They want everybody to feel at home and welcome to enjoy the inside of the building and not only the outside. The restaurant and terrace are new and open to the public. Even the Kurzaal is open for everybody, not only hotel guests. This room is definitely worth your visit.

To go up to the rooms you need your room key to operate the elevator so there will be no noisy, unexpected people on your floor. The hotel recently renovated 60 rooms with new furniture, equipment and all modern facilities that an exclusive tourist needs. If you are there we would definitely recommend you to book a room with a sea view and if available one of the suites. They offer more space and the decoration is classy to make you feel like royalty. If you are an early bird you will be able to witness a wonderful sunrise from either your room or the breakfast area.

Besides the fact that the hotel is well situated and has the looks of a palace, the service is wonderful. Many places with the same allure are stiff and formal. Here on the other hand you feel welcome and at ease, as if you were visiting family. They offer valet parking, tours through the building and the minibar is included in the price. On top of that they are planning to build a spa very soon to ring back the origin of the building.

On the 8th of August 1964, the Rolling Stones performed in the Kurzaal. After only a few minutes all hell broke loose. A fight started between all spectators, police and the Kurhaus personnel. Nothing survived, chairs ripped out of the floor, iron railings torn apart and even the chandeliers did not last long. It was only after the police cleared the room, the damage was visible. This concert is known as one of the shortest concerts ever given by the Stones.

As mentioned before they have a new restaurant and terrace named ‘waves at the Kurhaus’. They used to have a Michelin star restaurant but as they choose to change their image it is now a more approachable place to eat. In our opinion waves at the Kurhaus has one of the best value for money menus and it is definitely worth a try. The view alone will blow your mind. The terrace outside is large yet cozy. Thanks to the fact that it is higher than the boulevard it gives you both a wonderful view and less sand in the air when it is a bit windy. Ideal conditions to enjoy your cocktail when the sun is setting. This is the perfect end of your luxury weekend by the sea at the Grand Hotel Kurhaus.

What do you prefer? Formel or approachable? Let us know in the comments below.

Your email address will not be published. Required fields are marked with *

Food & Drinks that are near

What is on your Italy bucket list?⁠ ⁠ We are a

Big congratulations to the amazing team of One&Onl

Definitely one of the most inviting pools for us.

Set free the explorer inside you and be one with t

Occupying the topmost floors of one of Shenzhen's

Ever had dinner in a cave? At the Ipoh Hotsprings

How do you express your love? How about building s